Princess Takane and the Raven, by James J. Stevenson 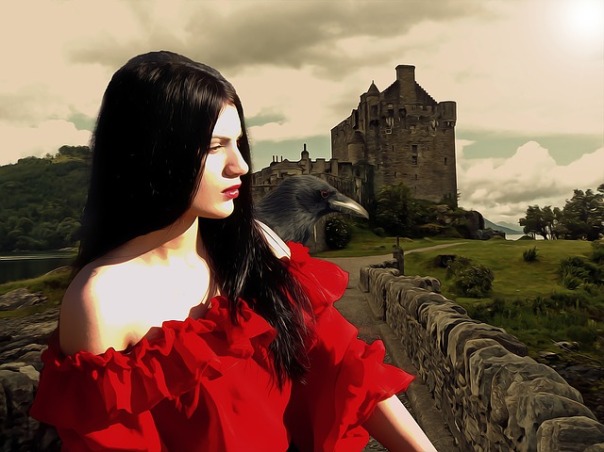 The fairest fairy living in the forest realm of fey,
trapped in her prism tower, was known as Princess Takane.

She envied every Eagle, Elk, and Elm that she could see
for finding love with matching birds and beasts and even trees.

She thought herself a little bird who’d somehow lost her voice,
condemned to marry for her throne regardless of her choice,

but then she met a Raven who alighted on her bed;
he’d flown in through the window fleeing rain and cold, he said.

She let him rest and dry his wings but once the sun returned,
she asked for him to stay a while and sing a tale he’d learned.

He sang of floods and secret isles, of tricks and lies he spoke,
of all the trees he’d known before, of Bonsai, Spruce, and Oak.

He sang all day until the sun relented to the moon,
but Takane, who wanted more, asked for another tune.

The ballads became bleaker as he sang into the night,
the odes were now of tragedies, of arrogance and blight.

He wrapped his wings around her when the Princess seemed to cry,
thinking that his stories were the only reason why.

But Takane surprised him with a kiss upon his beak,
explained the marriage that she’d have in just another week.

She knew she loved the Raven and was sure he loved her too;
he’d been her hero, and for men, that’s all they need to do.

His tales had been the kindling for the fire in her heart,
but forest fires must be contained or all else falls apart.

The fairy realm required her to wed another fey,
and so she told the Raven that he must now fly away.

She knew he’d find more branches where he’d stay a little spell
and tell his tales and stay the night and fall in love as well,

but she’d make her heart an Ash Tree if he ever needed rest:
to sing to her and mourn new loss and have his war wounds dressed.

So if you ever see a Raven who’s flying on his own,
direct him to an Ash Tree so they both won’t feel alone.

But don’t lament the morning when the Raven flies away;
for a night know he was happy with the Princess Takane.

My poems, stories, and comics have been published in a bunch of anthologies and journals, but the quickest way to see what I’m up to is @writelightning on most social media. I frequently post haiku+photography (often of my Star Wars action figures…) with over 400 in my archive. All my social media links are at writewithlightning.com