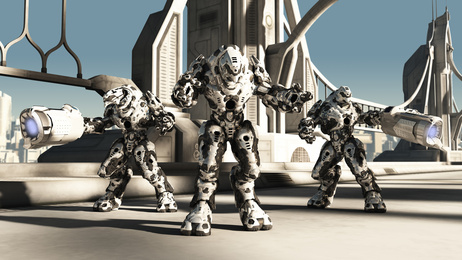 The thought of life existing on worlds other than our own, out there in the asteroid-filled expanses of deep space is a fun one for writers. One thing we like to think about is: what kind of tools or machines would aliens use in their day-to-day lives? This is what I asked for from authors for this issue: write about some of the technology employed by off-world sentient races. I got some interesting and fun stories in for this one. There’s an android. And alien potato chips!

As I said to my friend Rexodigis 9.5  from the planet of the Squid People: “Is that a particle gun in your tentacle sling, or are you just happy to see me?”

ANNOUNCEMENT: The Shinigami Stories: Reaping the Harvest of Souls issue will be a contest issue! One lucky author will win a prize for best story ($15). Two-runners up will receive $10 and $5, respectively for second and third place. I’m a broke-ass college student, but I’m also an author, and I know what it’s like to not get paid for your hard work. It’s been awhile since I could afford to do a contest issue, so I’m glad I’m able to do one again. Unlike the last issue, which was a reader’s poll, I may want to have judges for this one. Not myself. Please email me if you are interested in judging the contest at were.traveler@gmail.com. As I’m making this issue a contest issue, I’m changing some rules for the submissions. See the Calls for Submissions page for details.

Now back to your regularly scheduled reading!

The Purple Gumdrop, by Michael A. Kechula (flash)

Not Too Bad, by Lisa Hawkridge (micro-fiction)